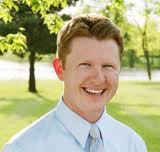 Dr. Eric Roadman grew up in Lee’s Summit and is a graduate of Lee’s Summit High School. Eric attended Truman State University in Kirksville, Missouri and received a Bachelor of Science in Biology while competing on the track team all four years. Eric went on to Chicago and completed his Doctor of Optometry at Illinois College of Optometry in 2000. While at ICO Eric received Marchon’s Practice Management Award and was co-founder and president of the soccer club.   In his free time, Eric enjoys spending time with his wonderful wife, his twin boys and their daughter. Eric also enjoys brewing beer, golfing and running when he gets a chance. Dr. Roadman and Betsy love raising their family in the same
town that has blessed him with so many great friends and memories.